It was always going to happen.

Two nights ago, the girls and I had three chapters plus the epilogue of Harry Potter and the Deathly Hallows left to read. Last night, we simply couldn’t stop — could anyone have stopped, I ask you? — and I kept reading aloud, and drinking peppermint tea, and reading aloud some more until the book was finished.

And now, quite understandably, we are feeling a little bereft.

It seems like only a month or so ago that we started reading Harry Potter and the Philospher’s Stone, embarking on our J K Rowling odyssey. In reality, it was several years ago, and we even had a considerable hiatus between books four and five to allow our (very visual and emotionally sensitive) Miss Malaprop to be sufficiently old enough to cope with the content without having nightmares.

There have been so many laughs along the way, as well as tears, as Harry Potter and his friends have woven themselves in the fabric of our existence. Whenever any of us has to read something less interesting or onerous, we trick ourselves into persevering by inserting the words “Harry Potter and the…“ before the title. Recent examples of works made far more palatable by this process have been Harry Potter and the Land Tax Exemption for Land Used and Occupied Primarily for Low Cost Accommodation, and Harry Potter and the Effects of a One Year Development Programme for Recently Graduated Veterinary Professionals on Personal and Job Resources, and the truly inspiring Harry Potter and the Australian Privacy Principles.

See? Every so much more fascinating once you add in a dose of Harry. A little magic goes a long way in such cases.

But a little magic helps us get through life every day, doesn’t it? 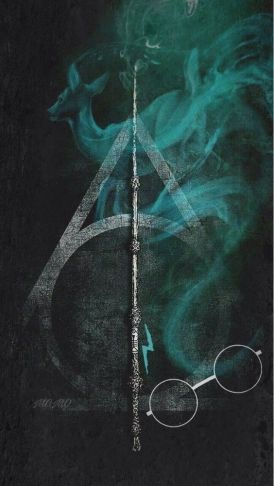 Both my children have the words Nox and Lumos on their bedroom light switches. Both have Hogwarts robes, Gryffindor for Marvel Girl and Slytherin for her sister, in their wardrobes. All three of us have our wands, which chose us (of course) at Ollivanders, and mine (since I am a Ravenclaw) sits beside my laptop, ready for use at any time. I even have my Hogwarts letter, apparently redirected many times over until it finally arrived, courtesy of a dear friend and a then much smaller “owl” who flew it to my doorstep on my 40th birthday.

All of these things are treasured.

The world is not a smaller place now that we have finished reading the books. Rather, each of our universes has expanded to include the realms of possibility, of imagination, and of magic. We are all more conscious, every day, of the saving power of love.

And it was hard last night, really hard, not to tear up when reading the final portion of the seventh and final book in the series to my children, particularly when I read these words:

Of house-elves and children’s tales, of love, loyalty and innocence, Voldemort knows and understands nothing. Nothing. That they all have a power beyond his own, a power beyond the reach of any magic, is a truth he has never grasped.

How fortunate are we, to have the benefit of these so-called children’s tales, and to know their power really is beyond the reach of any magic.

And so we will embark on new adventures, in search of new tales, perhaps with Sparrowhawk as he wends his way from the Isle of Gont towards becoming an Archmage, or with Zaphod Beeblebrox tripping through the galaxy, or perhaps we will stay closer to home, roaming the streets of colonial Sydneytown with Beattie Bow, or dancing in the Anzac Deli with Mareka Nikakis.

Yet I know, deep down, that in years to come my children will more than likely read the Harry Potter books to their children, and will love them just as much then as they do now.

After all this time?