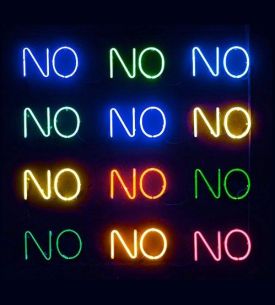 I have been saying NO to my children for a very long time.

Despite my best efforts to be a mother who phrases things positively, explaining what I want them to do rather than what I would like them to stop doing, there has been one small, though significant thing I have been saying no to repeatedly — pretty much ever since they learned how to walk and talk.

No, we are NOT getting a pet.

No, not a dog either.

No, not even a fish.

And it’s not like I haven’t had good reasons for saying no. In fact, both my girls can quote you, chapter and verse, the many and detailed reasons I have provided to them over the past nine years (since our last pet passed on) why we would not be getting a replacement four legged friend any time soon.

There have even been occasions — usually when they have been particularly persistent in their pestering for a pet of their own — when I felt tempted to start spounting the lines from Labyrinth Sarah uses to defeat the Goblin King.  Go on, I would think to myself, try me: “My will is as strong as yours and my kingdom as great…YOU HAVE NO POWER OVER ME!”

But the thing is, as it turned out that one small creature DID have power over me.

During the Easter holidays, I softened my hardline just a smidge: I finally relented and informed the girls that they would be allowed to get a small tank and some fish. They would need to be in charge of cleaning the aquarium, feeding and caring for their new finned friends. They also needed to work out how much everything would cost and stick to a budget when making their initial purchases — gravel, tank decorations, the fish themselves, the works.

And then, while we were at the pet store, Marvel Girl and Miss Malaprop just happened to venture down to the far end of the shop to a couple of cages containing animals who were up for adoption. They might even have “borrowed” my phone to take pictures of said creatures…or, more accurately, of one in particular.

We went home, set up the tank, washed the gravel, positioned all the plants and the hula hut decoration, got the filter and lights going and and began treating the water so it was ready for fish.

Later that night, once the kids were in bed, I found a series of photographs on my phone. They weren’t great pictures, because many of them had the bars of a cage featuring prominently in the foreground. But beyond the bars was a small, furry feline with tabby/tortishell markings, spectacular whiskers, beautiful eyes and an elegant tail that resembled a plume.

She was one year old. Desexed, microchipped, vaccinated. And she was a stray.

Next morning, I woke up well before the kids.  Without even meaning to, or realising what I was doing, I picked up my phone off my bedside table and began scrolling through the images of the small, furry creature who was most definitely not a fish.

The Bloke rolled over, wondering what on earth had possessed me to start checking my phone at 5:00am.

Ah, he said. I thought this might happen.  I saw her too.

So, as it turns out, we returned to the pet store that day and came home not with fish, but with a small and ever so delightful cat we have named Tauriel.

And since we got her — or since I said YES — I have made some interesting discoveries.

I have yelled less. We have all been calmer, and made an effort to get along with each other better. We have tried to make Tauriel feel at home, and she was rewarded us with her madcap toy mouse-capades and her speed scampering up and down the hallway, with purrs and playful bites and with the joy only an animal can bring.

The many and varied reasons why we should not have got a four-legged friend remain, and will continue to do so, but after eight or nine years of saying NO, Tauriel appeared at precisely the right time for me to change my formerly made-up mind.

A rescue cat, is Tauriel. And even though we may have rescued her from an uncertain future, I suspect we all feel she has rescued us, too, and that we are as lucky to have her as she is to have us.

And the fish? Well…we finally got them too — and Tauriel takes great delight in watching Mahalo, Taco, Nacho and Mrs Norris swimming around in their tank. So do we.

A fortnight ago we buried The Bloke’s cousin.

Glenn was 57 years young and taken from this world way too soon, but in the past couple of weeks I’ve come to appreciate the lessons of his life — lived to the full, replete with positivity and passion for the things he loved.

I didn’t know Glenn all that well, but whenever I did catch up with him he was always affable and ready with a story and a laugh. He gave anything a go, particularly if it had wheels. He thoroughly enjoyed being in the bush. He loved his family and adored his wife.

In the days that followed his funeral, we found ourselves coming closer together as an extended family, recognising in the various activities we were doing the things Glenn would have got a kick out of.  He would have loved The Bloke surprising us when, after a strenuous hike down to the bottom of Wollangambie Canyon, he pulled an inflatable dinghy out of his backpack so anyone without a wetsuit could have float on the cool, clear water.  (Well, to be more accurate, it was near-freezing water, but it was still at least twenty-seven kind of fun).

Later, around the campfire, we recalled the curly haired larrikin who was known at various times to have sported a beard as bushy as Ned Kelly’s. The air was full of the smell of woodsmoke, toasting marshmallows, and the sound of kids’ happy shouts. The howling of the wild dogs beneath the escarpment wouldn’t have send Glenn hightailing it inside like it did us, but once safely ensconced back inside we raised a glass or two of Bundy and coke in his honour and told stories about him crossing the Nullabor on a motorbike with a side car (allegedly filled only with a case of beer).

Glenn might be gone, but the tales — even though many of them are true — will only get taller now that he has. He might not be here to tell us we’re a bunch of rabbits, but we’ll know exactly when he would have. The irony of him being taken from us too soon when he was often rather more than fashionably late for everything would not have been lost on him.

And when the going gets tough, as it inevitably does from time to time, we will be able to recall the bravery with which he approached the end of his life.  I’m guessing we will always be able to find Glenn somewhere, maybe in the sound of the wind in the trees, or the sight of a stretch of open road, and we’ll hear him urging us onwards, ever onwards.