I went to a 5th birthday party over the weekend. This is not an unusual occurrence for me — though I should probably point out that technically I wasn’t invited to this do. These days the only parties I’m actually asked to attend are 40th birthday celebrations, and all the other events I turn up to are ones that my kids have been hanging out for, counting down the days until they can revel with their little mates.

Yeah, I know: you’ve seen me. I’m one of those parents hanging around in the background, chatting away, a takeaway coffee in one hand, my handbag bulging with cast off socks, shoes, sweaters and irreplaceable pass the parcel prizes that I have been instructed to keep very, very safe.

Saturday’s event was no different. The venue was a play centre with a focus on make believe, the birthday girl was looking resplendent in a white and pink dress, and the kids who she had asked to share her day were lovely — quite lovely. No one rough, no one rude, no one restlessly prowling around looking for strife. Not that I was surprised by any of that — the birthday girl’s parents are, after all, two of the best people you could ever meet, and their kids have been raised to know the meaning of love, kindness, tolerance and respect. For me, it is genuinely heart-warming to see that their children have befriended other kids who appreciate and value those very things (even though there are times when my dear Miss Malaprop and Marvel Girl need reminding in no uncertain terms — though firmly gritted teeth, even — just how much they ought to appreciate and value those very things).

And so, with the party in full and joyous swing, the play centre hostess invited all the children from the party we were attending to line up behind a curtain for a fashion parade, so they could show off their party clothes or a costume from the “dress shop” beside the stage. The kids dutifully trooped backstage, and the parents — equally dutifully — rummaged through overstuffed bags to produce their phones, ready to record their small starlets emerging onto the stage to strike a pose. Cue lights, cue music, cue the birthday girl’s grand entrance, but…hang on, who’s that kid in the red shirt with the plastic dinosaur hanging out of his mouth, stomping all over the stage and whipping the curtain around?

That’s right, folks. We had a gatecrasher.

At first, the parents who were watching tried to laugh it off. It’s not easy trying to capture your child’s big moment on a camera phone when another child is running amok from one end of the stage to the other. Surely the boy’s mother or father would come and get him, tell him to get off the stage and out of the way of the kids who were trying to get through the curtain for their turn in the parade? Surely they would recognise that his behaviour was unsuitable? Uncalled for? Downright rude? I mean, I understand that the play centre is a public venue, but this particularly fashion parade was part of a private party that the birthday girl’s parents had shelled out their hard-earned for. Those yellow wrist bands weren’t just a fashion statement for the parade — they were proof of payment. We all began looking around, wondering when dino-boy’s parent or parents would arrive on the scene, when he would be hauled off the stage and given a dressing down, or at the very least be presented with an explanation of why his interference was as inappropriate as it was unwanted.

But no one came forward. No one at all.

And it kept happening. The party ran for two hours, and by the time the birthday girl and her little mates were sitting down to feast on chips and chicken nuggets, we were all tired of dino-boy trying to muscle in on the action. We stopped him going through the (closed) door to where the kids were eating. We asked him not to throw things through the window at them as well. We, the onlooking parents (that is, those adults who were actually bothering to look after their children), became, unsurprisingly, less polite.

Much has been made in recent years of so-called helicopter parenting in all its many and varied manifestations. But what, I ask, about invisible parenting? What of the parents who let their kids run riot, who fail to provide anything approaching adequate supervision, who rely on some kind of (increasingly non-existent) communal goodwill to deliver in absentia parenting to their little darlings who are invariably interrupting carefully planned and paid for events, occasionally hurting themselves or others in the process? Because dino-boy’s parents weren’t the only ones guilty of invisible parenting while we were at the play centre: a small girl fell headfirst off the stage, began howling at the top of her lungs, and no one turned up. Again, those of us who were watching quickly came to her aid, asked where her parent was, and deposited her — still screaming — into the arms of a staff member.  Five minutes later the employee was still holding her, still looking for her mum or dad.

I understand that there are times when things happen — sometimes they’re just little things, sometimes they’re full-blown Holy Mother of God crises — and you can’t watch over your children. I would venture to add that parents and non-parents alike appreciate that this can and does occur and, in my experience, most people are more than happy to help out when it does. But I am getting to the point where I take umbrage at the sight (or sound) of an unattended child being allowed by an invisible parent — or perhaps by their very invisibility — to disturb other people’s peaceful enjoyment of their lives. I do not wish to live in a nanny state, nor am I advocating hovering over every child’s every move. But common sense (which may not be as common as one would think) suggests that treating others with a certain level of decency is generally appreciated. 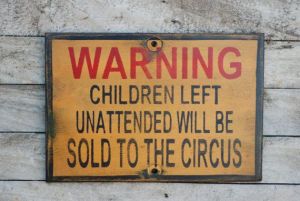 We still don’t know who dino-boy’s parent was, or what they were doing during the hours in which he did his level best to gatecrash a party that, despite his numerous interruptions, was a great success. To their credit, the birthday girl and her friends had a wonderful time and managed to ignore the annoying impostor in their midst. I suspect this has a lot to do with them being raised to know the meaning of love, kindness, tolerance and respect, and I applaud them for it.

I realised that I was in an uncharacteristically optimistic frame of mind this morning when I hung my washing out on the clothes line despite the fact that the weather report had forecast a thunderstorm today. Not that I’m naturally pessimistic, or that I have significant trust issues with the general veracity of Bureau of Meterology bulletins (I’d describe them as relatively minor trust issues, most days).

But I do admit that I was truly amazed to find myself out there in the back yard shortly after 8:00am, beneath skies that could at best be described as leaden, blithely hanging sheets on the line.

Even when a few tinsy drops of rain fell on the windscreen as I drove Marvel Girl and Miss Malaprop to school and preschool, I was completely unfazed.  My washing, according to my miraculously positive (or perhaps delirious?) mindset, was going to get dry. On the line. Today.

It may have been around this point, or shortly after a grin spread across my face when I didn’t have to switch my windscreen wipers on because the rain suddenly stopped, that I began to wonder whether maybe, just maybe, I had stumbled upon that oh-so-elusive Holy Grail of the Home Front: Laundry Enlightenment.

Had I inadvertently strayed into domestic nirvana without even realising?  Was samsara near at hand?

Laundry is, quite literally, motherhood’s dirty little secret. No one ever tells you before you have children just how much washing small people can generate over the course of twenty-four hours. The simplest explanation of why this undeniable truth remains unsaid that I can provide to prospective parents is this: anyone who already has a child is too busy doing laundry to tell you.

I am not (yet) so cynical that I would substitute a more traditional newborn gift with a jumbo box of washing powder and a super-sized container of stain remover. It is true, however, that day after endless day we wash clothes, hang them out to dry, fold them into tidy piles, place them lovingly in the closets and drawers of our progeny and quite possibly of our spouse as well (knowing that if we don’t, we’ll only trip over them at 3:00am when someone calls out for one last glass of water).  It’s not rocket science — far from it. But it is relentless.

Doing the laundry — with all its insistent, inexorable cycles — often brings to my mind the old Zen adage: “Before enlightenment: chop wood, carry water.  After enlightenment: chop wood, carry water”. The fact that Buddhist teacher Jack Kornfield should have written a book on mindfulness and meditation entitled After the Ecstasy, the Laundry does not surprise me in the least.  Similarly, the fact that I haven’t had time to read Kornfield’s book — buried as I generally am under an avalanche of dirty clothes — does not fill me with astonishment either.

But every now and then, days like today come along when we rise above mundane routine: days when we defy the odds, we forget about taking calculated risks, we ignore the dire predictions of the weather forecasters.  Days when we hang our queen sized sheets on the line and let them flap away with gay abandon — thunderstorms be damned.

For the record, my washing did get dry today. On the line. By itself.

Just don’t get me started about the ironing.