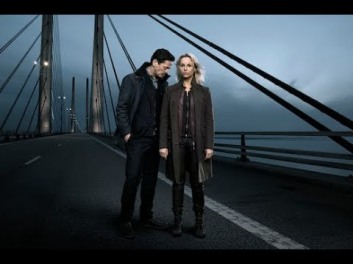 I can’t begin to tell you how much I’m going to miss that line.

Yes, I know it might sound a little weird to the uninitiated, but ever since the Series 1 of Swedish/Danish production of The Bridge (or, more accurately, Bron|Broen) was released in 2011, I have been hooked — and now that I’ve finished watching the final episode of Series 4, I’m feeling rather bereft.

Echoes start as a cross in you
Trembling noises that come too soon….

There will be no Series 5.

There will be no more trips across the Øresund Bridge linking Copenhagen and Malmö. No more hair-raising rides in the 1977 Hunter Green Porsche 911 S (the actual provenance of which has garnered much attention, though for my money the story of how its fictional owner came to possess it is far more interesting). No more dramatic overhead shots of the Københavns Politigård, the architecural marvel that houses the Copenhagen Police Headquarters (along with the equally sculptural earrings of Lillian Larsen, the Copenhagen Police Commissioner). 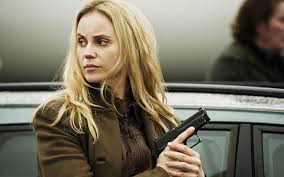 There will be no more Martin Rohde or Henrik Sabroe.

But, most of all, there will be no more Saga.

I have come to love the character of Saga Norén. She is deeply flawed, evidently damaged, detached to the point of being oblivious; she is also singlemindedly determined, forensically brilliant and utterly devoted.  Most of all, she is overwhelmingly human. Exceptionally well-acted by Sofia Helin, whose own facial scarring from a cycling accident in her early 20s only adds to her character’s singular, pared back look, Saga Norén is a Swedish detective with a difference.

In Series 1 and 2, Kim Bodnia’s portrayal of the extroverted, easy-going Martin Rohde offered such a contrast to Saga’s standoffishness and complete lack of even the most basic social skills that I couldn’t help but feel for her — and to rejoice when she developed an unlikely friendship with her Danish counterpart.

And then you cut
You cut it out… 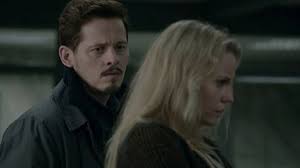 And so, in Series 3 and 4, I felt even more deeply for Saga as she navigated her relationship with Rohde’s replacement, Henrick Sabroe, who is (entirely unsurprisingly for a production as good as this one) brilliantly played by Thure Lindhardt.  Henrik is plagued by his own demons and quite literally haunted by the disappearance of his wife and two daughters years before. But it is Henrik’s acceptance of Saga — Saga, exactly as she is — that results in her increasingly apparent vulnerability and her ultimate recognition that she may be capable of loving, and of being loved.

There were moments in Series 4 when the sun actually breaks through the carefully controlled palette that colours the whole production, glimmers of hope in an otherwise grey-skied world that so frequently descends into shadows and darkness. And as Saga finally began to face her past and square off against her future, I wanted so badly for her to succeed — even though I didn’t want the journey to end.

I know it’s not real — that it’s just TV. That it’s could easily be written off as just another Nordic Noir show to binge on. But, in my opinion, The Bridge is one of the best television productions I have seen in a very long time, and it was as much a privilege as it was a pleasure to watch.

Saga Norén, I will miss you.

And everything
Goes back to the beginning…