Nijinsky as the Faun

I have been forever fascinated by how humans can convey the depth and width of their emotions without uttering a single sound. You may think it odd that someone like me, who relishes and cherishes the written word, would value such expression so highly – but, quite simply, I do.

I love watching people dance. I’ve written before about how my children do, too. And while I don’t mind a bit of a boogie myself from time to time, there are some things — ballet, for example — that I believe are best left to the experts. To those rare individuals who are disciplined enough to dedicate their lives to honing their skills and their selves to the point that they bare their very souls on stage.

On Saturday night I was fortunate enough to witness one such individual dance, when Alexandre Riabko took to the stage as a guest artist with the Australian Ballet in the title role of John Neumeier’s Nijinsky.  It was a powerful, masterful performance, vividly depicting Vaslav Nijinsky’s life inside and outside of dance via a series of memories and hallucinations as he descended, finally, into madness.

Descent into madness…Alexandre Riabko as Nijinksy.

Watching Riabko inhabit Nijinsky’s interior world, as other dancers recreated his recollections — of being the Golden Slave in Scheherazade, or of the Faun in L’apres midi d’un faune, or of Petrouchka, or of learning his ballet steps with his brother and sister  — was mesmerising. But as other dancers began to give form to Nijinksy’s delusions and as his complex relationships with his lover and employer at the Ballet Russes, Sergei Diaghilev, and with his wife, Romola, visibly unravelled, I was filled with an overwhelming sense of tragedy. 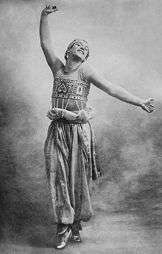 The image of Nijinsky returning again and again to something like second position, arms outstretched, as though trying to find his centre and a sense of safety in the midst of his increasing confusion was heartbreaking, particularly when juxtaposed with the transformation of his memories of Diaghilev — performed with all his usual elegant line and length by Andrew Killian — from sensual lover and suave mentor to sinister impresario.

No footage of Nijinksy dancing is believed to have survived — Diaghilev, apparently, would not allow him to be filmed — but during the two and half hours he was on stage, Alexandre Riabko had me completely and utterly convinced that he was channelling the spirit of the man whom many regard as being one of the greatest interpreters of the artform to ever set foot on a stage.

I left the Sydney Opera House deeply saddened by the tragedy of Nijinsky’s tale — he never again danced publicly from the time of his final performance in 1919 until his death, after spending years in and out of asylums, in 1950 — but I was also, ultimately, uplifted by the sheer intensity, beauty and bravery of the performance I had just witnessed.

And I suspect that feeling — one of great admiration tinged with sorrow — would have stayed with me for the remainder of the weekend, had I not had the pleasure of attending a Greek Orthodox wedding with my family the following day.  My daughters had never been to a wedding before, and they were entranced by everything about the experience from the singing at the wedding ceremony to the table settings at the reception. But what really captivated them — and me — was the dancing.

Watching the wedding guests encircling the dance floor, every one of them tracing the intricate steps of a Syrtos, was every bit as mesmerising as the ballet had been the night before.  Here were women — some in sensible sandals, most in spectacular stilletos — and men following in the footsteps of those who had come before them. Here was a sure-footed groom, leading his radiant bride. Without uttering a single word, the dance spoke of tradition, of continuity, of community, of family.

And as the long line of dancers wound their way around the room, I found myself thinking of each of their bodies as a living link to the past, stretching all the way to the present and then onwards, ever onwards, as they danced into the night, celebrating with the newlyweds and wishing them a lifetime of happiness in the future.

A long line of tradition and celebration…