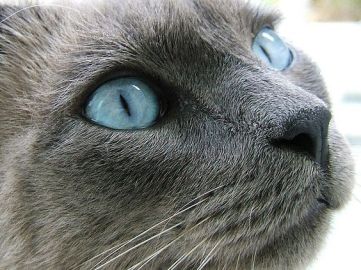 Oh, that Grey Cat…if I actually had a cat like this one, I would have to call it Cillian (for obvious reasons).

The untamable bane of my existence.

I’m not talking about physical restlessness.

Generally speaking, I’m not the fidgety, twitchy, can’t-sit-still type — unless I’m having a Squirrel Week, of course, and then I’m virtually incapable of staying put for two seconds together.

No, my Restlessness (and it definitely has a capital letter) is the mental kind.

For as long as I can remember, I have been a day dreamer and a night thinker…a girl with a head full of Elsewhere.

It’s not that my life is boring, or incomplete, or something from which I am constantly seeking to escape.  And I am not always away with the pixies.

But it does creep in, my Restlessness, like a sleek grey cat prowling after its prey, sharp-clawed and stealthy, yet as insubstantial as smoke. And try as I might to capture this evasive creature, or to pinpoint the source from which it springs, it forever eludes me: just as I reach out to snatch its silken ruff it will suddenly vanish —  leaving me, at best, with a wisp of a glimpse of its silvery tailtip disappearing from the corner of my eye.

The Grey Cat appears when you least expect it, on paws as silent as smoke.

In the past I fought that Grey Cat, seeking to stem the restlessness by studying (literature, history, remedial massage, law — anything), because I was not comfortable with how unsettled it made me feel. But I found that filling my head with knowledge does not take away the all-pervading sense of Elsewhere, when its steps with soft paws into your mind — nor does it diminish its allure.

So I travelled, following in the footsteps of my veritable gypsy of a grandmother whose wanderings criss-crossed the globe as she flitted from this country to that continent, living one endless summer after another. But I discovered that I was as easy with that lifestyle as she was, as happy a traveller, as content with my own company, and as ready to roll with the rhythms of life on the road. Elsewhere, it seemed, was still Elsewhere.

And I also found that no matter where I went, the Grey Cat came too.

How I wrestled with it, struggled to make sense of it. I tried to tame it by writing it out, knowing and longing for the clarity of thought I possessed when it wasn’t taunting me:

My mind is unfettered, my thoughts unchained,
springing fully formed from my head
like Pallas Athena,
soaring skyward into the boundless blue,
blessed and bountiful,
arrows searing, sure and true.

But the Grey Cat — like many things made of shadows — is a wild creature, and it won’t be tamed by words or wishes.

It’s all a matter of perspective, really…

So I learned to live with my Restlessness. And, over time, I made peace with that mysterious Grey Cat and all its slippery ways.

I learned that having a head full of Elsewhere is a valuable thing when you need to consider something from a wide variety of perspectives.

I learned that all that day dreaming and night thinking can be a veritable gift when it inspires you to create an entire fictional world, fill it with characters, and bring them to life on the page.

And the Grey Cat?

Yes, it still stalks me, and pounces when I least expect it. But lately I have found that when it does, that elusive creature sometimes let me sit with it, in silvery silence, and allows me to meet its luminous, blue-eyed gaze.

One thought on “Head Full of Elsewhere…”