So I can’t say I’ve done a huge amount of movie-going this year, and I still haven’t watched Season 4 of Peaky Blinders, which I know would have made my list had I got around to it…some things have to be savoured. Because Cillian Murphy.

But I did manage to see a few things that caught both my eye and my attention, so without further ado, here is Blue Jai’s Top 5 on Screen for 2018.

This incredible piece of writing and genuine human bravery by Hannah Gadsby was intended as her farewell to comedy, but became a significant part of a much larger global conversation about equality.

I have no idea how Gadsby pulled off doing her live show of Nanette night after night, but I do know it sparked a rare argument between me and The Bloke and moved me to write about my reaction to that event and to watching this tour de force, which I called We Need More Words. Because we do. This, in my view, and with no pun intended, is compulsory viewing.

Another piece of viewing that resulted in its own blog post was the final instalment in the brilliant Swedish/Danish production The Bridge (Bron|Broen). There is so much I love about this show — despite it being Nordic Noir at its finest, with all that entails, I was so attached to the main characters and invested in the eventual outcome of their respective journeys (particularly after the brilliant final episode of Season 3) that I did not want Series 4 to end.

But since it as, I’m looking forward to watching this again. No, wait…let’s be clear: I’m looking forward to sitting down with all four seasons through again. If you’ve not seen it, please start at the beginning and stick to the original Scandi production instead of wasting your time with remakes. For me, The Bridge sets the benchmark for quality TV viewing.

Generally speaking I include one sentimental favourite in my Top 5 each year, and this is 2018’s offering. I freely admit to being a sucker for any Marvel movie, and felt it my duty as a fan to include one this year as a tribute to the late, great Stan Lee.

The main reason Ant-man & The Wasp makes this year’s list, however, is that we have finally got to the point where we can see Marvel Movies (well, some of them) as a family — and this was our first shared experience of the Marvel Universe together. Marvel Girl and Miss Malaprop enjoyed the film so much that they went to see it a second time with The Bloke’s parents, who were as baffled by the storyline as they were by the girls’ massive enjoyment of it, but I’m chalking that up as a parenting win. Antman & The Wasp was a rollicking good time, complete with “that gigantic underpants scene” my kids found so funny. What’s not to love?

Yeah, yeah…I know — this came out ages ago, but finally popped up on Netflix so I actually got to watch it, so it’s on my list for 2018.

That said, I found the concepts in this film so intriguing — particularly the treatment of time and language. Amy Adams and Jeremy Renner both delivered solid, convincing performances, and I was genuinely moved by the decisions Adams’ character faces and ultimately makes. This is so much more than a “human meets alien” flick, and it’s well worth a couple of hours of your time. 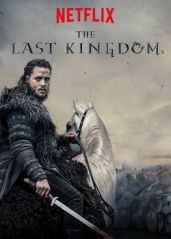 An unusual choice? Perhaps, but I’m as big a sucker for TV based on historical events (regardless of its accuracy) as I am for historical fiction.  The Bloke and I do struggle with — and snigger at — the voiceover that precedes each episode of this Netflix Original starring Alexander Dreymon as Uhtred of Bebbanburg, a Saxon raised from early childhood as a Dane during the time of Alfred the Great.

This, to my mind, is the strongest of the three seasons made so far, particularly in its depiction of Uhtred’s changing relationship with his childhood friend Brida and of King Alfred’s struggles as he faces his impending death.  The presentation of the idea of England — an as yet unrealised dream, intangible but still powerful — also drew me in. If you like a bit of drama with a few big battle scenes and plenty of long haired blokes running around with swords, The Last Kingdom is plenty of fun.

Honourable Mentions this year go to Black Panther, a movie that has generated a bunch of press for all the right reasons as well as being a fantastic addition to the Marvel Universe, to Salt, Fat, Acid Heat, Samin Nosrat’s fantastic Netflix series that is part travelogue as well as being a top notch cooking show, and to every single brilliantly written season of Brooklyn 99, my go-to pick-me-up comedy.

And now, since it’s the summer holidays, hit me with your best viewing of 2018!