So without any further mucking around, and in totally random order, here’s the list — with some favourite lines thrown in for good measure:

This is one dark, edgy track from Murphy’s Missing Link EP — and it hooks you right from the opening line. If you’ve been living under a rock somewhere for the past few years and haven’t already encountered Nick Murphy in his former guise, Chet Faker, you’re in for a treat with this one. And if you’re not dancing (or obsessing over someone) by the end of this song, I’m not sure we can be friends. Really. Nothing personal, it’s just that kind of music.

Subjects in my mind, running wild, images of a parallel life…

Vera Blue’s Perennial was nominated for Album of the Year at the 2017 J Awards — and rightly so, in my opinion. She’s a powerful and interesting vocalist (I loved her work on Slumberjack’s track Fracture as well), and this song taps right into the fantastically frustrating vibe of wanting someone you can’t have, no matter how vividly you imagine it. Totally worth a listen.

3. Everything Now by Arcade Fire. 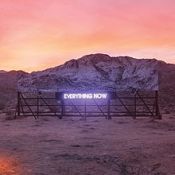 Every song that I’ve ever heard
Is playing at the same time, it’s absurd
And it reminds me, we’ve got everything now…

I’ll be honest — Arcade Fire are one of my favourite bands. Ever. And this song has been the soundtrack to many a morning walk along the beachfront near my home this year. The lyrics are, admittedly, bleak, but the overall sound of the piece is overwhelmingly joyful — particularly towards the end, when there’s a real festival vibe going on. In an era of information overload and fake news, I’m grateful Arcade Fire is there to critique it and turn it into something uplifting and beautiful.

4. Cloud 9 and Marryuna by Baker Boy.

You want to be as good as me boy you better practice: step back in the power of my blackness…

So this one is a tie — I couldn’t bring myself to choose between these two Baker Boy tracks, because they’re both absolutely brilliant. These raps are a blend of English and Yolngu Matha language, and Baker Boy does Arnhem Land more than proud representing his people. He’s as good live as he is in the recording studio, and at just 20 years of age I’m looking forward to hearing a whole lot more from this supremely talented rising star.

5. The Deepest Sighs, The Frankest Shadows by Gang of Youths

In a crowd unfamiliar, I just wanna touch a familiar face
And make friends at the parties I’ve feared the likes of an age
To be wanted with truth and make formidable love
See light in myself that I see inside everyone else I know…

How good is this band? It was no surprise to me that they absolutely cleaned up at the ARIAs this year. Go Farther in Lightness is an album packed with David Le’aupepe’s mindbendingly well-written lyrics accompanied by the driving rhythms and soaring melodies all Gang of Youths fans have come to know and love. This is my favourite track from a great album. Check it out.

See? He really is The Man.

Honourable mentions go to The Killers for The Man — a song I half expect to turn up on a Peaky Blinders episode in the future because it seems (to me, anyway) to capture Tommy Shelby’s strut and sass, not to mention his complete self-assuredness. And that’s not just because I’m a huge fan of anything Cillian Murhpy does…it’s a great song. This year I also think Nick Mulvey’s Myela deserves a mention, not least because it highlights the plight of refugees in a world prone to forgetting some of the planet’s most desperate people, and — on a much lighter note — Lorde’s Homemade Dynamite is also top flight listening.

So there we have it: the last of my Top Five’s for the year. Given that I’m a veritable magpie when it comes to music and that I listen to a wide range of stuff from all over the world, I was somewhat surprised that the majority of the artists I’ve highlighted here are Australian — but that’s where I’m from, and I believe in supporting the local music scene, so perhaps it’s logical even if it does reflect a certain Antipodean bias.

Anyway, I’d love to hear what your Top Five songs were this year. Feel free to use the Comments to let me know, and I’ll be sure to give them a spin.