Why do all these words sound less offensive than illegal?

I’m not referring to the mindless repetition of a single tag across a public space — that’s about as impressive as a dog pissing to mark its territory.

Walls that belong to other people.

Graffiti, from written words to wall paintings, has been around for thousands of years. The ancient Egyptians did it, so did the Greeks. Any visitor to Pompeii would know that the Romans were bandits for it. From Ephesus in Turkey, to Tikal in Guatemala, to Sigiriya in Sri Lanka, people across antiquity have left their marks on walls, painted for posterity, or more likely scratched — which is, of course, the meaning of the Italian word graffiato, from which graffiti got its name.

“Girl with Bluebird” by the elusive Banksy

In modern times — particularly since the advent of the aerosol can — graffiti has been taken to a whole new level, raising it from vandalism to art. Part of street art’s appeal is that it is subversive: its very presence is usually illicit but, by virtue of its accessibility, it is able to elicit a response from the broader population. Street art is often political. Provocative. Daring. It’s bold and it’s brave and, despite its illegality, it can also be downright beautiful.

Street art is also intriguing because some of its greatest practitioners are shrouded in secrecy. From 1932 to 1967, Sydneysiders would awake to see the work of Arthur Stace wherever he chalked the word “Eternity” in elegant, Copperplate script on pavements throughout the city. During the course of his life Stace is estimated to have produced the word around 500,000 times, writing his way into popular culture as he did. His identity was eventually made public in 1956, but his work was immortalised when the word Eternity was illuminated on the Sydney Harbour Bridge at the 2000 New Year’s Eve celebrations.  The image was used again during the Opening Ceremony of the Sydney Olympics later the same year.

More recently, Blek le Rat — one of the originators of stencil graffiti — produced his work anonymously in Paris for a decade before he was identified (and arrested) by French police in 1991 as he stencilled a replica of Caravaggio’s Madonna and Child on a wall. His style is distinctively Parisian, frequently depicting dancers and musicians, as well as style icons like Diana, Princess of Wales. Since 2006 Blek le Rat has held exhibitions of his work in galleries around the world, but has expressed his preference for working in the streets where it can be seen by a much wider audience than in a gallery.

The identity of influential Britsh street artist Banksy remains a closely guarded secret, despite numerous claims by various newspapers that they have discovered who he is. Banksy’s stencil art is often satirical, politically charged, and wickedly funny. In the words of Shepard Fairey, “Banksy paints over the line between aesthetics and language, then stealthily repaints it in the unlikeliest of places. His works, whether he stencils them on the streets, sells them in exhibitions or hangs them in museums on the sly, are filled with wit and metaphors that transcend language barriers.” Like Blek le Rat, however, Banksy also prefers to use the street as his canvas, stating that “when you go to an art gallery you are simply a tourist looking at the trophy cabinet of a few millionaires”.

A metal print of Birgit Kinder’s “Test the Rest” on my dining room wall…complete with extra graffiti. The original has been repainted multiple times since it was first produced in 1990.

One of my favourite pieces of street art now hangs on our dining room wall — a metal print of a Trabant 601 breaking through the Berlin Wall from the famous East Side Gallery, a 1.3km-long section of the wall on Mühlenstraße in Freidrichshain-Kreuzberg that has been described as a memorial to freedom. Another metal print hangs in our hall, a montage of graffiti from various sections of the Berlin Wall before it came down on 9 November 1989.

And that’s where I think the lines of street art begin to blur: when it begins appearing on walls in suburban houses, or when its production has been given public approval. 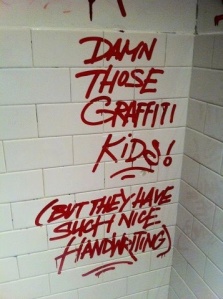 I remain torn between wanting to take my kids to see the gigantic Kosmonaut mural Victor Ash painted in Kreuzberg in 2007, which has — unsurprisingly — become a Berlin landmark, and wishing they could simply explore the city and discover the incredible urban art that has been created without approval.

Because that’s the thing about street art. You can hang it on your wall, you can stick it on a Pinterest board, but the best kind will always be the piece of graffiti you stumble across on the street — the one that the artist has put there to communicate directly with you and whoever else sees it.

On walls that belong to other people.

Out in the open.

3 thoughts on “The Writing on the Wall”